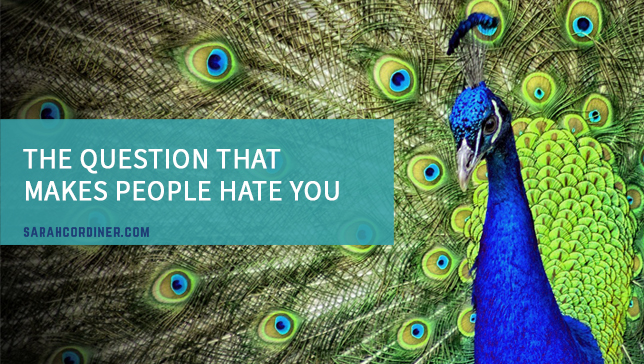 I was recently having dinner with a friend, when the diners beside us struck up conversation.  After the usual small talk, ‘that’ question was asked.
The one that people find impossible to leave alone, the one that people cannot possibly get into real conversation without asking, the one that makes us all wary of one another until we have got it out of the way so that we can measure up our penis size and establish a hierarchy.
I personally wish we could take a leaf out of the canine book and just sniff each other’s behinds upon meeting, instead of having to go through the drudgery of answering this question.  The ‘so, what do you do?’ question.
Lets face it, if you’ve got a shit job, this question can only make you feel like shit, with some humiliation thrown in.  If you’ve got a great job, you either have to dumb it down so that you don’t make the people with shit job feel more like shit, or answer honestly about your hard earned success and look like a bragging asshole.  Nobody wins.
To illustrate this, I continue my story..
Follow Sarah on Facebook
After we got this question out of the way, and everyone decided that my ‘I love my job’ response made me an asshole, my friend and I moved to a bar where we discussed this very topic.  Said friend then performed a dramatic mocking re-enactment of me answering The Question, which on the outside was an infuriating insult, on the inner crust was jealousy, but in the core was undeniable low self-esteem.
The external judgemental insult was painful to swallow, but discovering that my happiness and overt success made my friend feel inferior was a shocker.  Only minutes later, the spare seats at our table were filled by a pair of friendly travellers who asked The Question also.  I deflected the question with a nervous giggle and a ‘mot much’ response thinking it would make me feel good to know I would not come across as a bragging asshole that makes my friend feel inferior; but what I discovered following this response was incredible….
I felt terrible.  I felt robbed of a moment of glory in which I could bask in the celebration of my achievements.  What was this feeling? I normally hate this question, but not being able to answer it made me feel like all the pride I had earned myself through fighting, striving and tirelessly working to succeed had been stolen from me.  And so I come to the following conclusion:
You do not have to brag to celebrate your success, but to celebrate your success is not bragging.  You have worked hard to succeed, you have achieved and you deserve every tiny ounce of glory, pride-basking and self-congratulation that you can give yourself.
It is yours to hold victoriously in the air as you take The Question as a merited moment of deserved applause.
If you ever feel you have to dumb down or hide your successes for fear of looking like a bragger or making others feel bad about their own lives, then do those people a massive favour and stop hanging out with them.
If one of your successes is being a great coach, leader, friend or carer, then continue to have open pride in your successes while supporting your friend in the building of their self-esteem, self-efficacy and realisation of their own unique greatness and achievements.  Every single one of us deserve to sing with self-praise from the rooftops!
Psychotherapist Claude Steiner said that in order for us to have physiological and psychological well-being, we must frequently give ourselves as well as others warm fuzzy strokes – so sing it for your own wellbeing!
Share your successes with people who are inspired, motivated, enthused and joyous about the greatness of others’ atwww.facebook.com/efficacyeffect
Cheering at your incredible awesomeness,
Sarah xxx
Posted in Edupreneurship, Inspiration, Self Development and tagged bragging and awkward introductions, jealousy, Success